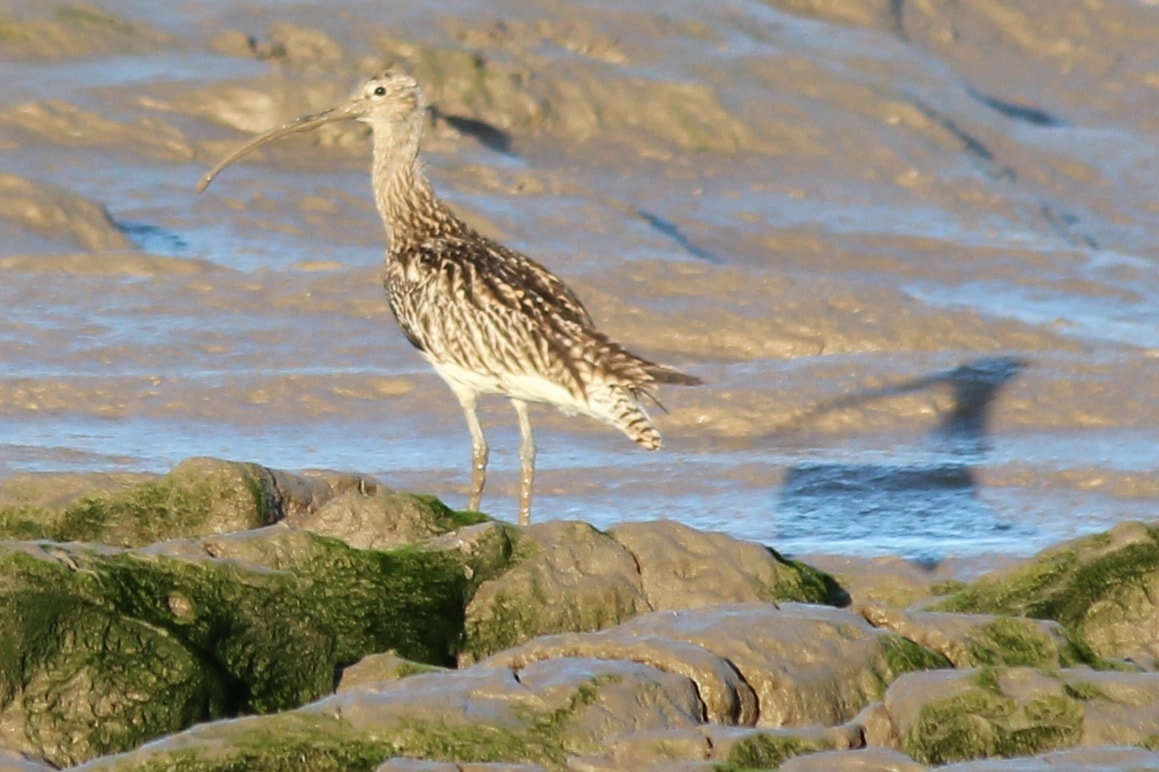 First written about by a Greek philosopher in the sixth century the curlew has continued to capture hearts and minds ever since. Celebrated in folklore, verse, art and music, this is a bird to remember.

So what is it about a large brown bird that makes us fall in love?  To begin with it looks very distinguished with long legs and a long down curved beak.

You are most likely to see it elegantly striding along the edge of our estuary at Portbury Wharf and Battery Point. You will see more in winter as they migrate to the coast at this time of year. In summer breeding curlews will head back to their nesting sites.

But it is not just its looks that makes it special,  it sounds pretty good too. Its beautiful warbling call is evocative of the moors and marshes where it lives.

Listen to its call  (click on the grey arrow)

Name: The Eurasian Curlew’s scientific name is Numenius arquata after its crescent shaped beak. Numenius is Greek for new moon and arquata is Latin for arch.

Age: the oldest recorded curlew was over 32 years but typically they live for around 7-11 years.

Size: about 50 – 60 cm long with a wingspan up to 100 cm. The female is slightly larger with a longer beak but it is very hard to distinguish from the male.

Habitat: in winter they live along muddy estuaries. They uses their long beak to probe the soft mud to find worms, shellfish and shrimps. Because its beak is longer than other waders it can reach food that they cannot. Rag worms are a favourite . . . lots of rag worm info here.

Nesting: in summer they migrate to moorland or riverside meadows to nest. They lay their eggs on the ground from May to July. Both parents take turns to incubate the eggs which will hatch out in 27-30 days. It will take another month before the chicks fledge.

On the brink of extinction

Same Near Threatened conservation status as the jaguar
Now there is an even greater reason to treasure this bird. It is on the edge of extinction. Our curlew, the one we see on our shores, our moorlands and our riverside meadows has the same “Near Threatened” status as the jaguar. Can you believe it? The Eurasian Curlew is now on the red list of species of most concern. What’s more it is at the very top of that list.

They have not bred successfully for many years. So the population has steadily declined and now they are on the brink of extinction. The main reasons are believed to be a combination of habitat loss, increased predation and a change in farming practices ie early harvesting of hay meadows and silage before chicks have fledged.  The breeding population has fallen by 65% since 1970. To successfully rear a family they need wet areas with invertebrate rich grasslands and low predator numbers (ie foxes and crows).

Now organisations are working hard to reverse this decline.

The Wildfowl and Wetlands Trust have started a curlew recovery programme. They are rearing wild curlews and releasing them into the Severn Estuary. So if you see any ringed curlew in the estuary let them know (and us).

Curlew Action is working hard to protect the curlew from extinction. They provide conservation advocacy and are developing resource kits for those working in the field. They are also promoting natural history education so British youngsters can connect with the natural world.

So by supporting these charities you can help the curlew.

Helping the curlew is a win win situation. Many other ground nesting birds such as lapwings and skylarks will also benefit from habitat improvement and protection from predators. But the good news does not end there as hares, hedgehogs, voles, bees, butterflies will benefit as will owls and other birds of prey. Returning the land to a more balanced ecosystem will reap huge advantages.

Why not put your knowledge to the test? Here is a quiz from Curlew Country

Follow the World Curlew link above to find out how you can get involved.

See more about the birds at Portbury Wharf