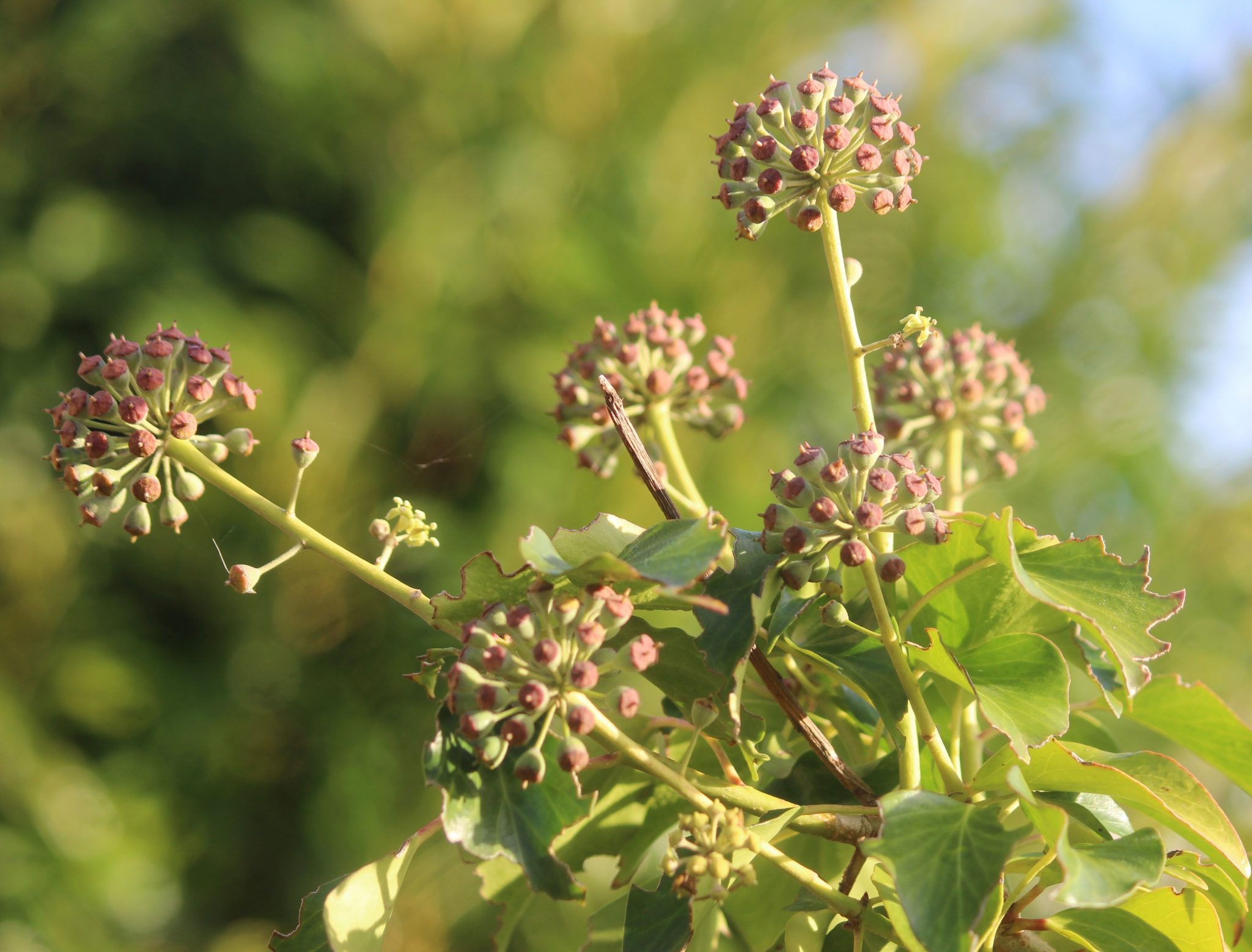 Ivy is an important plant for wildlife

English Ivy (Hedera Helix) is a valuable evergreen ecosystem. As well as providing nesting sites and shelter, it is a source of food and pollen for wildlife. Beneath its leaves insects, birds, butterflies and even small mammals, frogs and toads will shelter. Its nectar rich autumnal flowers and winter berries provide food when there is little else to feed on.

Only mature ivy, distinguished by un-lobed leaves, will flower then fruit.

Even our Portbury Wharf roe deer will dine out on ivy when the opportunity arises.

Ivy is a liana or climbing plant. People often think it is a parasite, feeding off the trees it wraps itself around, but it is not.  It gains no nourishment from the tree it clings to so does not kill the trees it grows up. However it may cause some damage by its sheer weight or by shading the tree. It can also happily grow along the ground or up a wall or even stand on its own if thick enough.

So many bees feed on ivy flowers

Ivy flowers from September to November. Butterflies, bees, wasps, hornets and many others come to feed on the nectar-rich flowers. So popular are the flowers that in late summer you can hear a heavily flowering ivy bush, it buzzes! It buzzes to the tune of hundreds of bees flying from flower to flower.

In November queen wasps, queen bumble-bees and queen hornets come to fuel up before their winter hibernation.

The Ivy Bee and the beautiful white Swallow-tailed Moth are two species in particular which love ivy. You can read more about these species at www.wildlifetrusts.org/wildlife-explorer/invertebrates/bees-and-wasps/ivy-bee and https://butterfly-conservation.org/moths/swallow-tailed-moth respectively.  The caterpillar of the Swallow-tailed Moth brilliantly imitates a twig. It takes some finding!

Many berries start forming while other flowers are only just opening. By December most of these beautifully architectural berries will have ripened to black. Once ripe these calorie rich ivy berries will feed many birds throughout the winter months lasting until April if uneaten. Indeed according to the RSPB, ivy berries contain nearly as many calories as Mars bars!

Do you know?
• Ivy was once thought to be a way of countering the worse effects of alcohol

• “Ale-stakes”, poles covered in ivy, were once used as signs for taverns

Appreciating Ivy and its Insects also from the University of Sussex https://www.sussex.ac.uk/webteam/gateway/file.php?name=pamphlet-ivyinsects-2013.pdf&site=60

This website uses cookies to improve your experience while you navigate through the website. Out of these, the cookies that are categorized as necessary are stored on your browser as they are essential for the working of basic functionalities of the website. We also use third-party cookies that help us analyze and understand how you use this website. These cookies will be stored in your browser only with your consent. You also have the option to opt-out of these cookies. But opting out of some of these cookies may affect your browsing experience.
Necessary Always Enabled

Any cookies that may not be particularly necessary for the website to function and is used specifically to collect user personal data via analytics, ads, other embedded contents are termed as non-necessary cookies. It is mandatory to procure user consent prior to running these cookies on your website.